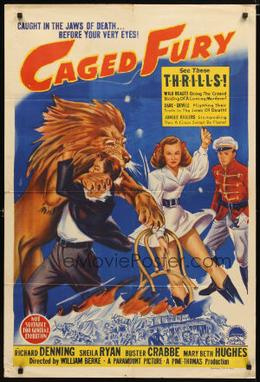 Lola is jealous of another circus performer, Kit Warren, a horseback rider Blaney has been seeing. A scheme by Smiley results in Lola's being trapped inside the cage and mauled to death by the lion.

Kit wants to replace Lola in the act. She begins to learn the lion-taming act but breaks up with Blaney in the process. Smiley is attracted to her and decides to do away with Blaney once and for all. He begins to abuse Sultan, dressing like Blaney in the hope of turning the lion against the other man. After he is caught red-handed by circus owner Corey in his sinister plot, Smiley kills Corey, but while speeding away, Smiley's car goes over a cliff.

A year later, Blaney and Kit are doing the lion-taming act when Smiley suddenly reappears. He had leapt from the car just in time. Now he's come back to murder Blaney, but during their violent fight, Smiley is fatally attacked by the lion.