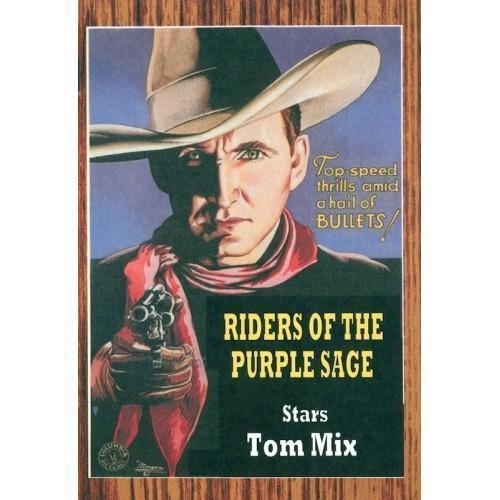 Riders of the Purple Sage is a 1925 American silent film directed by Lynn Reynolds and starring Tom Mix, Mabel Ballin, and Warner Oland. Based on the 1912 novel Riders of the Purple Sage by Zane Grey, the film is about a former Texas Ranger who pursues a corrupt lawyer who abducted his married sister and niece. His search leads him to a remote Arizona ranch and the love of a good woman.

When corrupt lawyer Lew Walters (Warner Oland) is run out of a Texas town, he abducts Millie Erne (Beatrice Burnham) and her young daughter Bess and forces them to accompany him, leaving behind a heartbroken husband and father. Millie's brother, Texas Ranger Jim Carson (Tom Mix), leaves his service behind, takes the name Jim Lassiter, and dedicates his life to finding Walters and his sister and niece. After several years, his search leads him to the Arizona ranch of Jane Withersteen (Mabel Ballin), who becomes attracted to the stranger after he rescues her chief rider, Bern Venders (Harold Goodwin), from being flogged for a crime he did not commit.

Lassiter and Venters go after a gang of rustlers who have been raiding the Withersteen ranch and stealing their cattle. They wound and capture the masked leader of the gang, who turns out to be a young beautiful woman, Bess Erne (Marion Nixon), Lassiter's long lost niece. Venters takes charge of the girl and soon the two fall in love.

Meanwhile, Jane admits to Lassiter that the man he is hunting is in fact a local judge, calling himself Judge Dyer. Lassiter rides into town and rushes into Dyer's courtroom, shooting the villain with deadly precision. Soon after, a posse is formed and goes after Lassiter, who flees with Jane and her adopted ward, Fay Larkin (Dawn O'Day), into the mountains surrounding Surprise Valley. They take refuge from their pursuers on a high plateau overlooking the entrance to the valley. The only approach to their hiding place is by a set of stairs cut into the side of the cliff. When Lassiter rolls down a boulder from the heights to block the posse's path, he and Jane are trapped inside Surprise Valley foreve.